Knee injuries are a common problem for the non-sportsperson and sportsperson alike but can be prevented by maintaining correct form when lifting and carrying out daily tasks or athletic exercises and ensuring strong musculature through the legs and core.

I believe that the advice given below is sound for prevention of all types of knee injury prevention programmes and even rehabilitation after injury. Of course everything below is just some examples and you should seek professional advice to tailor it specifically to your needs!

Further into this article we will be focusing on the anterior cruciate ligament (acl) injury of the knee as it is most commonly injured in sports where participants land from a jump, suddenly stop, change directions or pivot in sports like football, basketball, hockey, rugby, or skiing. (Brukner and Kahn, 2012).

So where do you start? 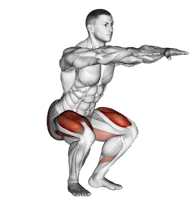 It is important to strengthen the muscles surrounding the knee such as the quadriceps, hamstrings and calves as well as important functional muscles like the core stabilisers and
glutes.
I tend to start people off with isometic (static) or small range muscle activation exercises focused around the simple squat and lunge and calf raise and lower for around the knee joint.  For the core and glutes we can go right back to basics with pelvic tilts, bridges and clams before progressing to more commonly known plank variations or stability ball exercises. 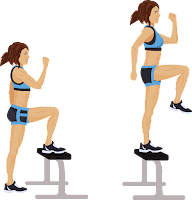 This should be specific to the lifestyle and sport that the person undertakes.
As with the strength training exercises; movements should be executed with the correct biomechanics. When landing, the knee should follow the toes, ideally remaining in a straight line above the middle toe or slightly pointed outwards towards the little toe. The knees should never travel inwards towards each other as this puts stress through the ACL (valgus stress). The athlete should have a slight bend in the knee’s and the hips when landing and try to land in a controlled manner with more weight placed through the forefoot rather than the heel (Voskanian, 2013). 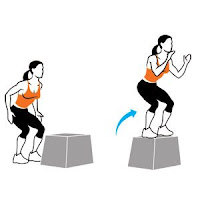 Plyometric training involves high intensity agility drills which work to improve footwork by developing power and speed. This can involve agility drills like quick sprints, stops and starts, cutting, lateral movements and jumping, ladder drills or even dance mat work. These activities should mimic the quick motor responses that an athlete would perform in a game situation (Voskanian, 2013).

When Should I Start And How Often Do I Need To Perform The Exercises?
For general conditioning a 15-30 minute training session between 1 (minimum) and 3 (optimal) times a week is effective.
For the athlete Voskanian 2013 as found that an ACL prevention program would be most effective in preventing injury if it is initiated 6 weeks prior to engaging in high-intensity sporting activity. Sessions should be 3 times a week and the program should be completed through the competitive season and can be used as a warm up prior to engaging in sporting activity.

As a Coach...Where Can I Find ACL Prevention Programmes?
The FIFA 11+ injury prevention program already has a proven track record in reducing knee injuries in youth and adult footballers. You can find the whole programme here

Posted by nrgize health and fitness at 18:59 No comments:

What's Blood got to do with it?

There are four main blood groups. Each type can be either RhD positive or RhD negative, which means that in total there are eight main blood types.
Blood is made up of red blood cells, white blood cells and platelets in a liquid called plasma. 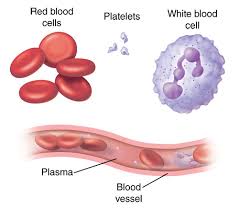 Your blood group is identified by antibodies and antigens in the blood.


Antibodies are proteins found in plasma. They're part of your body's natural defences. They recognise foreign substances, such as germs, and alert your immune system, which destroys them.
Antigens are protein molecules found on the surface of red blood cells.


Blood type A is the most ancient, and it existed before the human species evolved from its hominid ancestors. It has A antigens on the red blood cells with anti-B antibodies in the plasma
Type B is thought to have originated some 3.5 million years ago, from a genetic mutation that modified one of the antigens that sit on the surface of red blood cells. It has B antigens with anti-A antibodies in the plasma
Starting about 2.5 million years ago, mutations occurred that rendered that antigen gene inactive, creating type O, which has neither the A or B version of the antigen. It has no antigens, but both anti-A and anti-B antibodies in the plasma
And then there is AB, which is covered with both A and B antigens.
Red blood cells sometimes have another antigen, a protein known as the RhD antigen. If this is present, your blood group is RhD positive. If it's absent, your blood group is RhD negative. 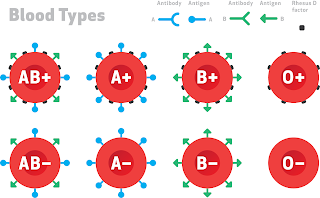 This means you can be one of eight blood groups:


The antigens are what makes some blood types incompatible:
If blood from a type-A donor were given to a person with type-B, the recipient's immune system would recognise the foreign proteins as an invader and cue an attack. The resulting immune reaction can kill.


Type O-negative blood is known as the "universal donor" because it lacks the molecules that would provoke that reaction (the "negative" means it lacks another type of surface molecule, known as the Rh antigen).

Posted by nrgize health and fitness at 14:25 No comments:

nrgize health and fitness
Derby, Derbyshire, United Kingdom
nrgize is Nina Flint. I specialise in injury prevention, treatment and rehabilitation. I have a detailed understanding of musculoskeletal injuries and we provide our clients with a full range of injury support, education and advice.